Today, 211 years ago, a storyteller was born in Odense, Denmark. Hans Christian Andersen became a prolific writer – of poems, travelogues, novels and plays … but it is for his fairy tales that he is most remembered and treasured.

Sad, clever, joyous and poignant, and always with a message to be a better, finer person (or animal). His tales have captured children and adults the world over since the day the stories were published.

Can you remember your heart breaking over the fate of The Little Mermaid (not the Disney version)? And sobbing as The Little Match Girl died in the snow? And that poor Steadfast Tin Soldier! Oh, and what about The Ugly Duckling … what a joyous comeback ending to being the odd one out in a group. And can’t you imagine our Prime Minister Turnbull as the emperor in The Emperor’s New Clothes?

And if you’re of my vintage you’d remember every single word of every song from that movie made in the 1950s about Andersen, with Danny Kaye playing the key role. It was fabulous. It brought alive so many of the stories. Remember ‘Inchworm, Inchworm, measuring the marigold. You and your arithmetic, you’ll probably go far.’

As a small girl, I picked up a few things from that movie …. that my favourite author was a real person once (even though portrayed on the screen in a romanticised way); and that music and lyrics makes one feel so much more. Here is Danny Kaye singing the Inchworm song. http://www.youtube.com/watch?v=fXi3bjKowJU

In the film, a children’s chorus sings the “arithmetic” section over and over inside a small classroom, dolefully and by rote, while Andersen, listening just outside, gazes at an inchwork crawling on the flowers and sings the main section of the song. It wasn’t an easy song to write with its counterpoint sections, according to Frank Loesser, its composer, but it was worth his persevering. See what you think.

Contemplating Andersen’s birthday and his life today … the most important lesson I learned from his fairy tales was the expectation that when I opened the cover of my beautiful, hard-covered book, something magical would happen. That thrill has never left me. 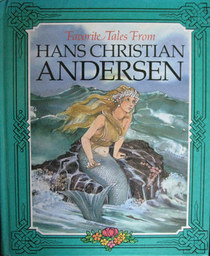 I’m sad for all children today who never read, or who read only when forced; those young kids whose parents never sit with them and read or tell stories to them; and then the final outcome of this … people who’ve never had the chance nor the inclination to allow their imaginations to grow and bear fruit.

Imagine how much kinder we humankind would be if everyone developed – like Hans Christian Andersen, and indeed like the great entertainer and humanitarian, Danny Kaye – a sense of wonder about our world; with imaginations large enough to feel for the lives of others. To make this world a better place for all.

Happy Birthday, Hans Christian Andersen, love from millions of readers from every continent on the planet. Yep, I bet there’s even a hard-backed copy down in some ice-station on Antarctica.

3 thoughts on “What I learned from Hans Christian Andersen”