* This article contains the names and images of deceased Indigenous people. I acknowledge that to some communities, it is distressing and offensive to show images of people who have died. I have weighed up my respect for this belief against the desire to highlight injustice and inhumanity.

In this National Year of Reading, I want to tell you a story. It’s not one that I tell very often because there’s a scar on my heart from a tragedy on April Fool’s Day, almost twenty-two years ago.

It’s a story of despair and hope and tragedy. It’s a story of a young man who fought demons from the moment he was born. It’s the reason I will never turn away from taking out racists who step in my path – with pen and rapier sharp, restrained fury.

Once upon a time, I taught adult literacy in Boggo Road jail, Brisbane’s notorious prison before it closed down. Now it’s a museum, a redeveloped urban village with its own Sunday markets and young urbanites sipping coffee.

Back in the late 1980s, my class was a disparate group of Murri inmates, indigenous men from Brisbane and regional Queensland. I was an ex-early childhood teacher with updated training in teaching reading and writing to adults. I worked for TAFE and ended up in the Aboriginal and Torres Strait Educational Unit – hence the job in Boggo Road.

I must’ve been brave in those days – or headstrong. Not only did I have no experience in dealing with cultural issues, I’d never worked in male only classes before, nor set foot inside a razor-wired prison.

Boggo Road hunched on a rise in the quiet suburb of Annerley, high-walled and with hidden atrocities. Between 1885 and 1913, forty-two inmates were hung on the jail’s gallows. There are tales of ghosts and unmarked graves beneath the bricks. Even in 1989, it had a fearsome reputation. Many of its more notorious inmates were household names – The Colossus of Boggo Road, armed robber and later Australian Wrestling champion, Nathan Jones; James Finch and Andrew Stuart, the “Whiskey Au-Go-Go” murderers, amongst others. I never came in contact with them. My brief was to lift literacy rates amongst the Murri prisoners.

The first day I walked through those gates, a warder took me to the Education Room – a loose term, as many of the prison guards believed punishment did not include education. But Keith Hamburger, Director-general of Corrective Services, an enlightened reformer had been in charge for a few years. Aboriginal prisoners were encouraged to do cultural studies, art and literacy.

That morning, twenty-six big, black men filed into the room and one asked, ‘Where’s ‘Melanie’? (my vivacious, popular predecessor). I told them she’d left. They voiced their discontent and I knew I had to take a stand or all was lost. So I smiled and said, ‘I bet you were disappointed when the teacher before Melanie left, but you got used to Mel. I’m here now, and I reckon you’ll be saying the same things to the teacher who’ll come after me!’  They laughed and we were okay.
Teaching literacy is a delicate business – how do you follow the curriculum and teach what one needs to know to survive in a print-based world, but still bring in teaching the sort of reading and writing that will open up the mind and the heart.
I held a morning class every week for almost a year. Sometimes, I was kept waiting at the main gates for several hours, but they didn’t know how stubborn I could be. Sometimes, the reasons were legitimate, like riots or shut-downs, or visiting social workers, or a death in the prison. But sometimes, I knew it was out of spite by a group of anti-education officers. 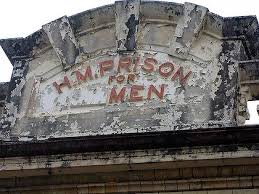 The classes ranged from two students to twenty. I never knew what to expect. The Murri prisoners were linked by their brotherhood in Boggo – much more than the white prisoners. There was always a warder, sitting at a desk, keeping an eye on things. The large, steely eyed Moira was one of them. Scary woman. But I never felt threatened by those ‘black brothers’ of mine in Boggo Jail.
I can’t claim to be the world’s best literacy teacher – if I find curriculum boring, I figure a student will feel the same, and I break rules. Hence, a lot of time was spent on poetry writing and song lyrics (their request), and life-story writing (my request). We tackled the filling in forms bit  together – yes, I was a literacy teacher challenged by official forms. And they had lots of those!
One student, a dark-eyed boy named Russell, took to poetry like  fish to water. His verse spoke of anger, politics, land rights and desperation. He’d been in and out of foster homes since he was three and in and out of jail since he was eighteen. But in prison, he learned to paint and to dance story, to express himself through written words and best of all, he discovered the cultural classes.

When the Government began to decentralise prisons, many Murri inmates of Boggo Road were sent north to the Mareeba prison and to the notorious Etna Creek prison, near Rockhampton. There’s a saying … the further north you go, the more racists you’ll meet. (I don’t hold to it, but I do have extended family up north who fit the bill).

Russell wrote to me from Etna Creek. He was pleased when he’d heard that many of his own Bidjara people were still in their tribal area near Carnarvon Gorge. He was keen to talk to them in language when he finished his sentence in a few months time. He was excited that Ross and I would visit Carnarvon with him and he’d ask the old people if that was okay. He wanted to come back to Brisbane to finish his time, and then go back to school somehow.

Russell’s final  letter began with the words … “To start things off, I’ve been in a bit of trouble up here.”  The trouble involved a fight with prison wardens and Russell ended up in solitary. Rumour was that Russell was defending his cousin. I wrote back, warning him to lay low and don’t bite back at the guards.

In the early hours of April 1, 1990, Russell died in the detention unit at Rocky jail. Police said it appeared he hanged himself. The Aboriginal community believed otherwise.

Hours after Russell died, another young man was found hanging with his wrists slashed. In his report, a Rockhampton newspaper reporter added his newly composed song dedicated to Russell and to black deaths in custody.

It ends with the words, How many more blacks must die before the white man will understand, that all he wanted was to be left along and given a second chance, to be back with family and friends when his time was due, but it makes me feel so sad inside ’cause it could have been me or you. Robert H’s sentence had just been increased by three months because he destroyed a blanket in his earlier suicide attempt at Blackall watchhouse.

The Aboriginal legal services spokesman said Aboriginal prisoners had complained of harassment and unfair disciplinary treatment by jail officers. The Corrective Services Minister at the time, Glen Milliner, rejected his statement, saying, “I’m annoyed that they are using these deaths to go public on this thing”.

My last letter to Russell turned up at my home the day of his memorial service. Unopened, with address unknown on the front. I’d misspelled the jail’s name. You would’ve thought someone in the system in Rockhampton knew there is only one jail in the district. My letter of hope for the future may not have helped Russell, but I bear the regret still.

This is one of Russell’s free verse writing, after he edited it in class for spelling errors.

Twenty years after the ROYAL COMMISSION INTO ABORIGINAL DEATHS IN CUSTODY, Crikey.com asks Why are the fatalities still rising?

32 thoughts on “About a boy … literacy, a right not a privilege”