We in this fair city have witnessed something many thought we would never see again – our winding, snake-like Brisbane river changing from its lazy, sinuous flow to the sea and turning into a huge, rushing, swirling, mud-laden monster that broke its banks and tore into the heart of suburbs and into the edges of the central business district.

There was no discrimination by this river – no picking off its targets. This flood tore through the suburbs of low-paid workers and millionaires alike. If you lived beside the river in a palatial mansion, or in a humble, weather-board house in low-lying suburbs not far from the Brisbane River or one of its feeder rivers, you were in the flood lottery – a lottery of countless winners. This time lives were lost and many thousands of people are homeless.

Who would have thought the river would destroy again? Not now we are a modern, sub-tropical fun-loving city, bigger and better than 1974, masters of land and waterways, embracing our beautiful river frontages with parks and cultural precincts, building multi-housed developments in low contours of the land, filling in natural streams, covering the soil with cement and bitumen. Complacent. 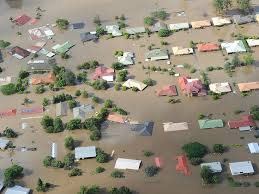 Many of us have not forgotten the horrors of 1974, the last time our river broke its banks, flooding into suburbs and into the centre of Brisbane city, submerging homes and leaving behind a foul-smelling, sticky, slimy mud that coated walls and floors.

I remember the sound and the smell of that monster river most of all. At the end of the street, even before you saw it, you heard its roar and the thumping, smashing sound as huge gums tossed about like matchsticks in the rushing water. The smell of disaster is not one easily forgotten – nor the sight of drowned cows, boats, parts of house roofs, refrigerators, and the debris of people’s lives – tossing and bobbing in the churning waters.

Never again did we think we would see the brown monster strike – now we had the Wivenhoe Dam, built in response to the ’74 flood, able to contain many millions of litres of water – to mitigate and regulate the Brisbane River’s flow to the sea. 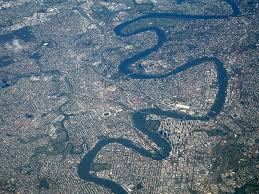 Two years ago, the dam was at a 16% level – the city was on Level 6 water restrictions. Who would have thought it would reach 197% full.

This time, all the circumstances that could cause a major flood happened. Rain in the region for 6 weeks beforehand; soaking the ground to capacity; major tributaries at capacity; high tides at the mouth of our tidal river; record-breaking rainfalls in the catchments areas and in Brisbane itself with its many creeks feeding into the river and forced (controlled) releases of millions of litres from the mitigation dam, Wivenhoe.

We love this river whatever it throws at us – and it does what it is meant to do as a tidal, floodplain river. It has flooded for millions of years. That is its way. This is its fourth epic-proportion flood since white settlers sailed up its sinuous curves and saw the beauty of its shores and the potential for cultivation on its flood plains. Previous known major floods were in 1841, 1893 and 1974.

Each of those floods and the relatively minor ones since settlement has astonished the growing population, just like this flood of 2011. Brisbanites learned lessons from each disaster.

We will learn more about the river’s character again this time. We will respect its power and its force all over again. We will remember – until the next time?