Never heard of Depew? No, neither had I, but if one travels from Chicago to Niagara Falls via Buffalo on AMTRAK, the inside of Depew Railway Station becomes very familiar.

We’re used to waiting for planes and trains now – there’s always something to do to fill in the time in the cities. Depew-Buffalo should be no exception. It’s the main crossroad rail link to Chicago, Canada, New York and Boston. We’ll catch the 3.30pm train to Niagara Falls, Ontario.

How was I to know Depew Rail Station is not in the middle of Buffalo? It’s on the fringe. And we were there after an 11 hour rail trip (overnight sitting up in Coach class) from Chicago, and now with 7 hours to kill on a Sunday.

‘So, what’s there to do in Depew?’ I say. The station only has a softdrink, packets of crisps and chocolate dispensor and we’re starving.

‘The Mall’s just down the road,’ he says.

That sounds promising. We can at least get something to eat and a cup of tea in a Mall. Maybe. Well, if desperate, there’s always dripolator coffee.

Walking to Depew Mall loses its appeal. Ever adventurous, Ross says, ‘Let’s head down the road a bit, there’s sure to be a cafe or something.’ So we set off with our packs on our backs in the early morning, chilly autumn sunshine.

The rail station is close to the light industry area. Of course, nothing is open. Not even the houses along the street – we see no people, no cafes, except a dog that follows us for a while.

After thirty minutes I’m freezing. So we head back – I’ve remembered the stale bread-roll and smoked pistachios in my pack. We won’t starve. Then Ross sees a large building with activity – cars parking and people heading inside.

So we go inside. It’s an ice-hockey rink and the game is starting – Depew’s teenagers – v – Visitors. Parents sit behind the glass to watch. We buy hot chocolate and salty pretzels and join them. 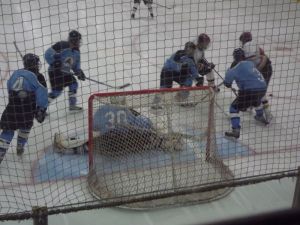 Neither of us watch much sport on TV so we don’t know much about ice-hockey except that it’s hockey on ice. Then the man next to us hears my foreign accent and asks where we’re from. We learn a little more about ice-hockey from him, and from the action behind the glass. It’s fast, rough, noisy, skilled and exciting.

And the hot chocolate is good.

The moral of the story?

It’s good to be adventurous, especially when stuck in Depew with nothing to do.